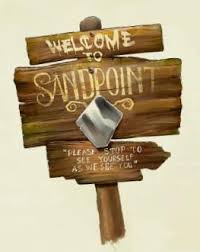 A group of ragtag local and foreign adventurers were summoned to The Rusty Dragon nestled within the bustling coastal town of Sandpoint . Ameiko Kaijitsu, a noble’s daughter and the sole proprietor of one of the oldest and most popular Inns/taverns in town, was looking to hire a few brave souls to look into the disappearance of some local town heroes that saved many townsfolk from a goblin invasion. Of more import, they also managed to save her life from a nefarious plan involving her own step brother and goblins. Although burdened with grief from the murder of her father, numerous poor artisans in her family’s Glassworks factory, and the death of her traitorous brother, Ameiko felt she had to repay the life debt she owed. They were last seen heading to the Nettlewoods to investigate a goblin stronghold located in an ancient site known as Thistletop. According to her brother’s journal, It was believed that the goblins within were responsible for the recent town invasion. It was also noted that a larger invasion was planned for some unknown time in the future. What happened to these brave heroes? You have been hired to find out. Rescue them, or return with their remains to put them to rest. Are you up to the task?

Rise of the Runelords (Candy) Comments

I'm sorry, but we no longer support this web browser. Please upgrade your browser or install Chrome or Firefox to enjoy the full functionality of this site.